Uncle Sam may be worried about silica, but North American industry apparently is not, as the region prepares to lead the global growth of silica sand through 2018, according to a new market forecast.

While the U.S. Occupational Safety and Health Administration is pushing to drastically lower worker exposure to respirable crystalline silica, North American demand for silica sand is expected to grow faster than any other region's, as the global market marches toward $12.5 billion in value in 2018, according to a new report.

The regional growth, led by the U.S. and Canada, will come mainly from expanded hydraulic fracturing, according to World Industrial Silica Sand, a new study from The Freedonia Group, a Cleveland, OH-based industry market research firm.

Overall, global demand for industrial silica sand is forecast to advance 5.5 percent per year to 291 million metric tons in 2018, the report says.

"Important" silica sand-consuming industries worldwide, such as the building products, glass and foundry sectors, will drive the growth with accelerated construction spending and manufacturing output.

NIOSH
Global demand for industrial silica sand is expected to increase 5.5 percent per year to 291 million metric tons in 2018, with a forecasted value of $12.5 billion, according to a new report from The Freedonia Group.

Constraining those gains will be efforts to use more recycled glass cullet in glass container manufacturing, according to the report.

Strong U.S. oilfield activity and increases in the number of fracturing stages per well will contribute to increased demand for sand proppants, according to the report.

While the North American market will see the fastest growth, the Asia/Pacific region will lead regional consumption through 2018, driven by the dominant Chinese market, according to the report.

Annual growth is predicted at 6.1 percent per year through 2018, topping out at 138 million metric tons.

China's container glass industry will add a boost, aided by rising production of glass bottles (especially those for alcoholic beverages).

In India, meanwhile, foundry activity will advance at a "healthy pace," leading to increased production of sand molds to manufacture metal castings, the report says. 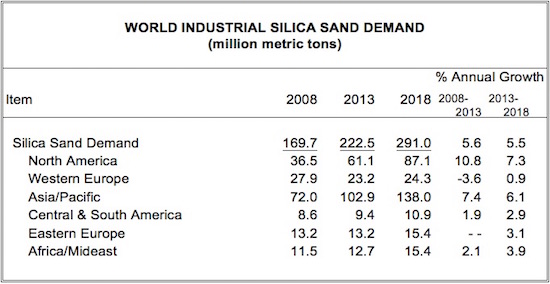 Silica sand will also see strong sales growth in Indonesia through 2018, due to rapid advances in the output of glass products and metal castings coupled with more hydraulic fracturing activity.

Western Europe is in for an annual gain of 0.9 percent: "modest" growth, says Freedonia, but still a rebound from the declines of 2008 to 2013. Credit goes to recoveries in building construction and manufacturing activity, including a turnaround in flat glass output.

Eastern Europe's consumption, flat from 2008 to 2013, is expected to increase by 3.1 percent annually through 2018, according to the report.

Central and South America and the Africa /Mideast regions are predicted to see annual increases of 2.9 percent and 3.9 percent, respectively.

The North America boom comes at the same time that officials are working to reduce exposure to respirable silica particles and increase awareness about silica's health risks. 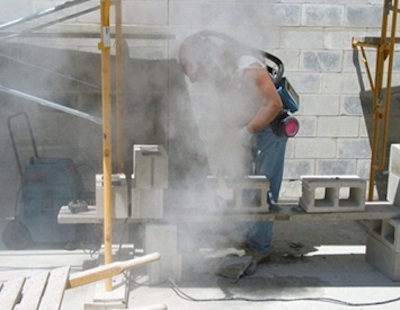 In September 2013, OSHA published a proposed rule to slash permissible exposure limits to respirable crystalline silica; those limits have not been updated since 1971.

In September 2013, OSHA published its Proposed Rule on Occupational Exposure to Respirable Crystalline Silica, opening up a flood of opposition from coating manufacturers and trade associations from the construction and demolition industries.

OSHA estimates that its proposed reductions to Permissible Exposure Limits (which haven't been updated for silica since 1971) will save nearly 700 lives and prevent 1,600 new cases of silicosis per year, once the full effects of the rule are realized.